TO: ALL MEMBERS, PROVIDORS, BENEFACTORS AND FRIENDS 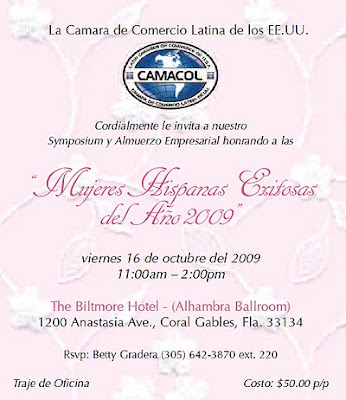 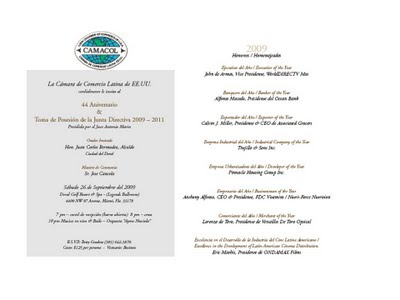 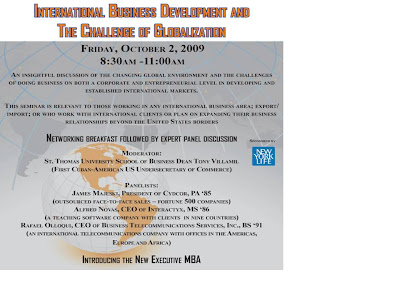 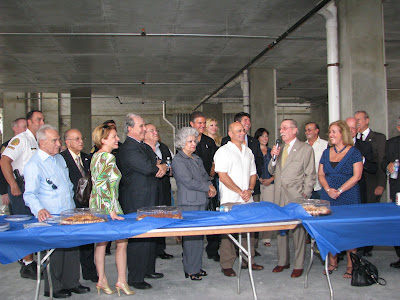 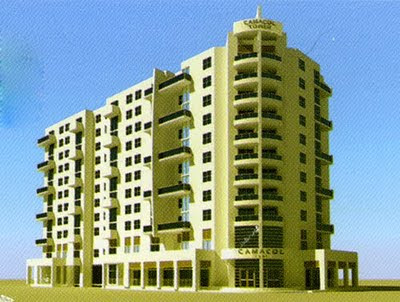 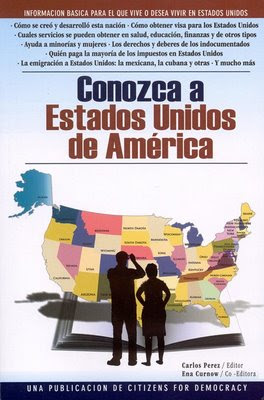 
In the City of Miami Beach, County of Miami Dade, State of Florida, United States of America, on the 30th day of May 2009, at meeting of the members of the Permanent Secretariat of the Hemispheric Congress of Latin Chambers of Commerce and Industry, comprised by the international directors; representatives of the entrepreneurial organizations of the democratic countries of the Americas hereby declare:

1. To foster, support and express solidarity with the message set forth by Jose Maria Aznar, former President of the Government of Spain who stated:
“If anything is justifiably necessary in Latin America is to launch an extraordinary agenda of freedom: No to authoritarianism, no to communism, no more intervention by the state. On the contrary, what is truly needed are more institutions. Solid institutions where the Rule of Law is respected by all with an independent system of justice that work, and that will guarantee the individual rights of all citizens with respect to private property and investmentment, both nationally and internationally…
“There is a grave problem and it is the temptation to experiment with populist projects and concepts. Here, in this region, much is spoken about 21st Century Socialism. Let it be known that 21st century Socialism is the same as 20th Century Socialism, the only difference is that it is more wearisome since we already know that the results will be dreadful and will bring about the collapse of those countries which adopt it.”
2. As International Directors of the Permanent Secretariat we embrace President Aznar’s message and make it our own. We join him and the speakers and panelists who contributed to our discussions and plenary sessions with their expertise and concerns over the current economic , financial, and social crisis which afflicts us, and which exacerbates the economic and political climate of our countries, by battering our infrastructure and secular sectors. The Ibero-American and Caribbean Chambers of Commerce, view with alarm the current developments and appeal for alternatives which will foster and strengthen production in the region; attract much needed investment, which will generate jobs and arrest poverty; bring forth judicial security and due process, and immediately eradicate the fostering of social conflict and division. We do not recommend more mechanisms of control. We recommend better mechanisms.

4. The entrepreneurs of the Hemisphere reiterate the need to implement effective policies of Social Responsibility which benefit the workforce and utilize our representative institutions to promote the well-being of families, ensuring issues such as adequate and affordable housing and education which will provide a high-skilled and qualified workforce.

5. The Permanent Secretariat of the 30th Hemispheric Congress, after having conducted extensive studies has concluded that it has an institutional obligation to alert the public, governments, and the international community on current activities which have happened in countries where the lack of the Rule of Law has been most evident. To this effect, these countries allow public political maneuverings to have more strength than respect for the Rule of Law. As such, it is worrisome that these regions run the risk of being overrun by delinquency, increased narco-trafficking, and terrorism, due to the absence of authority by these governments.

Accordingly, these damaging policies place law abiding citizens in peril. These citizens have the fundamental right to live in peace and to work. They are being jeopardized by these conflicts; their civil liberties are threatened, as is their right to private property and free enterprise. Therefore, the return of the Rule of Law, to institutions is instrumental so that these can effectively combat the impunity of those elements who take advantage of the vacuum created by this instability and chaos. Additionally, these institutions provide results in benefit of the citizenry. We therefore seek from of the governments of this region , especially from the United States of America, furthered coordinated efforts in the battle against narco-trafficking and guerrilla war-fare, in order to achieve effective and improved results in this conflict.

6. As a result and due to the severity and urgency of this aforesaid issue, is that the Permanent Secretariat of the 30th Hemispheric Congress has authorized its leadership with the task of presenting these issues before official national and international entities and organizations, and urge them to take action.

Directors of the Permanent Secretariat of the Hemispheric Congress 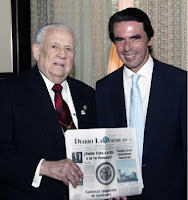 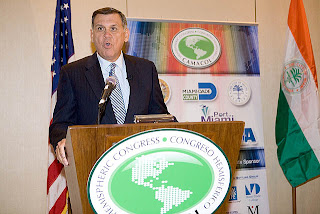 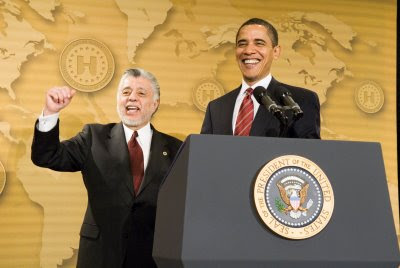 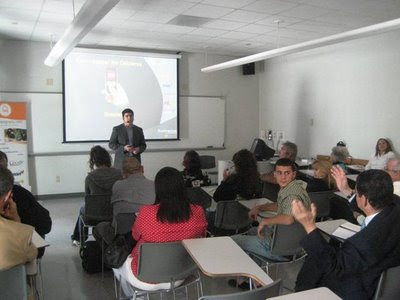 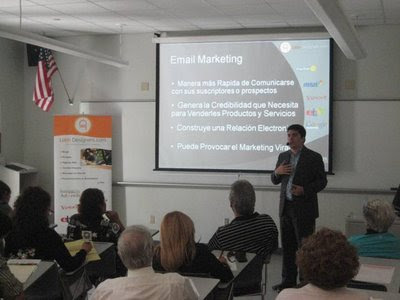 The Seminar was conducted by Carlos Andrés Gallego, known as a business consultant throughout the internet, knowledgeable expert of Google Adwords, and president of the company LatinDesigners.com.

Thirty-two businessmen received information on how can their businesses benefit from the web pages.
If you wish more information about the Seminars offers by CAMACOL, please check our Calendar of Events at http://www.camacol.org/, or send your e-mail to info@camacol.org. 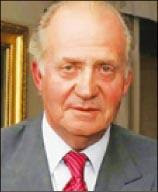 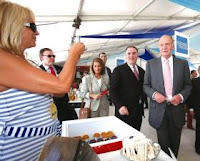 Spain Mission: The Beacon Council to Conduct an Economic Development Mission to Spain

Spain Mission: The Beacon Council to Conduct an Economic Development Mission to Spain
January 22, 2009Press Release
FOR IMMEDIATE RELEASE Media Contact: Aurelia Vasquez, Communications Manager 305-579-1341 / avasquez@beaconcouncil.com THE BEACON COUNCIL TO CONDUCT AN ECONOMIC DEVELOPMENT MISSION TO SPAIN Meetings to be held with Financial Services, International Commerce and Fashion and Lifestyle industries as part of the ongoing effort to bring job-generating investments to Miami-Dade County MIAMI-DADE COUNTY – January 22, 2009 – The Beacon Council, Miami-Dade County’s official economic development organization, is partnering with CAMACOL and the Spain U.S. Chamber of Commerce in leading a collaborative mission to Madrid, Cordoba and Sevilla, Spain from January 26 to the 30th. Frank Nero, President & CEO, The Beacon Council, the Honorable Natacha Seijas, Miami-Dade County Commissioner (District 13) and Chair of the Jay Malina International Trade Consortium and select Beacon Council members will lead the mission. Spain is The Beacon Council’s top international market and this mission marks the eighth visit to Spain since 1997. Through the organization’s targeted efforts, Spanish business presence in Miami-Dade has grown steadily in recent years and continues to attract leading financial, telecommunications and engineering/construction-related service companies. To date, The Beacon Council has assisted Spanish 55 companies in locating to Miami-Dade County, creating 1,724 direct jobs and $139 million in initial capital investment. In 2008, The Beacon Council completed 10 projects from Spain creating 239 new high-paying jobs and over $16.8 million in new capital investment. The mission schedule includes meetings with prospects considering Miami as a business location and key industry associations, as well as a joint business seminar in Cordoba. The message that will be conveyed throughout the mission is that Miami-Dade County is a global business center, offering Spanish companies a platform on which to do business in the U.S. and Latin America. The Beacon Council is targeting Financial Services, International Commerce and Fashion and Lifestyle industries on this occasion. Frank Nero, President & CEO of The Beacon Council states, “Miami-Dade has a solid relationship with Spanish industry and, despite the global economic crisis affecting us both, we still see a sense of optimism and confidence that our economies will be able to weather through the tough times. We remain aggressive in our marketing efforts and this mission will serve to strengthen the interest of Spanish companies looking to invest in our community.” The seminar in Cordoba on Tuesday, January 27 is being held due to the increasing interest and investment by companies of the Andalucía region in Miami-Dade. The Beacon Council recently met with a visiting delegation from Andalucía, and will now reciprocate by hosting a seminar for their local business community and will present to the advantages of being located at the epicenter of a vibrant metropolitan city with world-class transportation access, high-tech infrastructure, international business environment and a skilled, multilingual and multicultural workforce. On Thursday, January 29 in Madrid, The Beacon Council will host a business networking reception with key contacts, projects and officials. Together with the Greater Miami Convention and Visitors Bureau, the Miami: Where Worlds Meet campaign will be presented. In addition, Enterprise Florida’s Spain Office will be honored for their support and outstanding commitment to The Beacon Council. As part of The Beacon Council’s ongoing Fashion-Lifestyle Initiative, meetings will also be held in Madrid with key Spanish fashion industry associations. Contacts were made with these organizations through the assistance of the Spanish Trade Commission offices in Miami and New York. This mission is being supported in part through the Enterprise Florida South Florida European Grant, designed for the use of South Florida economic development organizations in their efforts to bring foreign direct investment into the region. The Beacon Council organized this mission in collaboration with Enterprise Florida in Spain; the Spanish Trade Commission in Miami, led by Trade Commissioner Belen Cristino; the U.S. Embassy and Commercial Service in Madrid; EXTENDA, the Trade Promotion Office for Andalucía; and the Spain - U.S. Chamber of Commerce. There are close to 50 Spanish multinationals currently located in Miami-Dade including Telefonica USA, MAPFRE, Banco Santander, Banco Bilbao Vizcaya, Caja Madrid, Santillana USA Publishing, and Porcelanosa among many others. In 2008, the total trade between Spain and the Miami Customs District was $740 million.
Posted by CAMACOL at 2/21/2009 08:28:00 AM No comments: